“I want revenge against anyone who’s ever been mean to me.”
— Patty Bladell.

Patricia "Patty" Bladell is a main character on Insatiable. She is played by Debby Ryan. She is Brick's girlfriend in the first season and half of the second season.

As Patty mentioned herself, she's destructive, not only to herself but also to those close to her. She is usually too honest for her own good which is shown by the fact that she ruined Bob Armstrong's life by telling everyone he is gay at her Birthday Roast in Episode 10 - "Banana Heart Banana". This may be partially due to her mother, who is a bad mom, ignoring her throughout her childhood and due to the bullying, she received during the time she was overweight. She is currently 18 years old. Patty is shown to have psychotic and homicidal tendencies and her eating is revealed to be a subconscious mechanism of hiding the truth. And she also tends to rush into relationships too quickly.

Patty always ate a lot in her childhood. She was bullied at school for being fat. She always wanted revenge on the people who brought her down, so when she got into a fight with a homeless man and got punched back she lost weight after having her mouth sewn short for awhile. She met Bob Armstrong, her lawyer with a passion for coaching girls to participate in beauty pageant, and both of them saw the opportunity. She therefore started participating in beauty pageants and after going through many rough situations, she got first place at The Miss American Lady pageant. 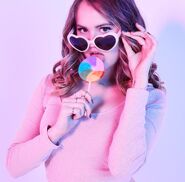 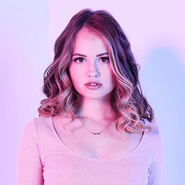 Add a photo to this gallery

Retrieved from "https://insatiable.fandom.com/wiki/Patty_Bladell?oldid=1873"
Community content is available under CC-BY-SA unless otherwise noted.